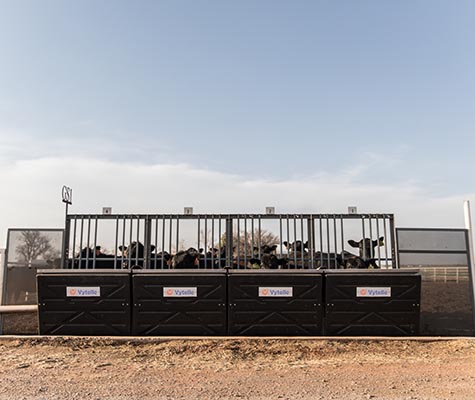 Like many other traditional industries such as automotive and banking, the agriculture and food markets are constantly faced with fundamental market shifts. New technology, science, digital capabilities, infrastructure, and viral marketing are beginning to converge, changing the environment and rules that many industries operate in. At Vytelle, we believe farmers are faced with what we refer to as “The Triple Challenge”:

No matter where your business sits on the supply chain, these market shift trends are here to stay. To thrive in a changing landscape, as an industry we need to embrace and adapt new practices that create more value.

At Vytelle, we believe the solution to the triple challenge is genetic progress because it can deliver both compounding and permanent benefits.

As an example of the possibilities of genetic progress, let’s take a quick look at feed efficiency in the poultry industry over the past 50 years, since it has improved by over 250%. Average feed conversion ratios (estimated kilograms of feed to produce a kilogram of meat) for broilers today are 1.7:1. In comparison, genetic progress for feed efficiency has been both inefficient and slow worldwide in cattle markets, with an average feed conversion ratio of about 6.8:1.

So, why have we not moved forward in progress of genetic selection in cattle? Three themes can summarize why this lack of progress exists:

Put simply, the farming industry needs to find better ways to breed the right cattle faster. For the cattle that are meeting overall breeding objectives, data verification and validation are behind the fact that they are known to produce less methane, be more feed efficiency, and have a higher return on profit. Keeping this in mind, Vytelle is accelerating progress of genetic selection in cattle by building the first integrated livestock technology platform where producers are able to access the tools they need to identify elite cattle, and target correct mating decisions to accelerate their improved genetic outcomes.

Cattle of all breeds will eat variable amounts of food per day. Depending on the breed, some may eat more, while others may eat less than their counterparts. Yet, all cattle gain the same weight due to the net feed intake (NFI), or the difference between the actual feed intake of an animal versus the predicted feed intake, of each animal for a given level of production.

NFI is a trait that’s moderately heritable3; therefore, we know with confidence that it will be passed on to progeny and can be used in parallel with other performance selection criteria. Selecting a desirable, low NFI is actually a risk-free factor in genetic selection, since it won’t affect growth, frame size, or carcass quality in any cattle breeds.

Benefits of Selecting for Efficiency

The benefits of genetic selection in cattle for feed efficiency include:

There is undeniably much focus around reducing the emissions of greenhouse gases (GHG). In the cattle industry, this is something that matters greatly, and something we can’t just avoid talking about. Ruminant production systems are known for emitting methane, which is a major GHG. If we can reduce these emissions, we can largely improve the carbon footprint of the beef industry.

Many initiatives, such as the ambitions by the Meat & Livestock Australia (MLA) to set forth CN30 carbon neutral goals, as well as the consumer’s voice, have been exercised in purchase decisions. These must be considered as government funded incentives, insurance plans, and preferential banking terms are being tied and connected with on-farm methane mitigation strategies.

One part of the solution is measuring and selecting for feed efficiency based off of NFI. Testing bulls is a crucial starting point; from there, making and identifying genetic selection decisions in replacement females and heifers can replicate efficiency for the entire herd, as well as stack generationally.

Vytelle is a curator of one of the world’s largest multibreed efficiency databases that incorporates 25 breeds. In the entire database of nearly 284,000 animals, there are actually seven Wagyu animals that are in the top 25% of the most feed efficient cattle.

This database also includes data on phenotypic feed efficiency for over 1,600 Wagyu heifers, bulls, and steers from five different sites worldwide. Of the 1,600 cattle, there are 274 Wagyu bulls and heifers that have been included in the multi-breed efficiency database at Vytelle to calculate expected breeding values (EBVs). The Wagyu NFI EBVs have moderate accuracies of up to 0.38 and with ranges from -0.32 kg to 0.40 kg.

On average, cattle consume about 7.23 kg for every kilogram of gain—on a dry matter basis. This is shown by feed conversion ratios (FCR) in Vytelle’s database of over 53,000 efficiency-tested cattle. Feed savings and feed conversion in the feedlot can be significantly impacted by selection for NFI in the breeding herd, especially for long-fed Wagyu programs.

With a 15% improvement in efficiency, which is highly likely when selecting for NFI, an average FCR of 6.15:1 can be achieved. For example, if a feeding period of 450 days is considered with feedlot entry of 300 kg and finishing weights of 725 kg, along with $380/tonne as fed for feed costs (given a ration with a 60% dry matter content, that’s $680/tonne of dry matter), a 15% efficiency improvement would result in $291.91/head of feed savings.

This efficiency improvement of 15% in the feedlot is quite significant, but further improvements are also possible. In fact, 11% of the efficiency-tested cattle in Vytelle’s database have FCRs of 5:1 or below.

Mature female populations can also be impacted by the benefits of genetic selection in cattle in long-fed Wagyu programs. Because of the trait’s ability to be heritable, we anticipate that for low NFI in younger, growing cattle, genetic selection would exhibit the same directional effect on mature cow intake.

A study was led by Harvey C. Freetly at the U.S. Department of Agriculture to measure the feed intake and body weight gain in 622 commercial crossbred 5-year-old cows and 687 heifers. Freetly’s team calculated the growth measurements and feed intake in groups of heifers that were divided over an 84-day period at 333 days of age and 228 days of age, respectively. Heifers were weighed nine times and rations were predominantly forage and silage crop-based throughout the trial.

According to the study, it was determined that average daily gain (ADG) and feed intake are genetically correlated and heritable between mature cows and heifers. Those performing the study expected that similar directional effects could occur in both heifers and cows that are young and growing. This encouraged selection for ADG and reduced intake.

Over the course of three breeding seasons and calves weaned, Parsons’s trial included 347 Black Angus females. Afterward, they determined that there is no discernible difference between production parameters, later reproductive performance, and heifer postweaning NFI classes.

Vytelle’s research and platforms have been proven to have great value when genetically selecting for feed efficient animals. The reduced costs and increased profit associated with feed resource savings have huge benefits without affecting growth, size, and performance traits. Additionally, savings from NFI remain constant throughout the lifetime of an animal without any discernible effects on reproduction, and efficient animals can generate lower emissions of methane.

Ideally, to accelerate genetic selection in cattle by using Vytelle’s integrated technology platform, all of these benefits can be implemented. With the triple challenge facing the global agriculture industry, this can act as a permanent and compounding solution.

This website uses cookies to improve your experience while you navigate through the website. Out of these, the cookies that are categorized as necessary are stored on your browser as they are essential for the working of basic functionalities of the website. We also use third-party cookies that help us analyze and understand how you use this website. These cookies will be stored in your browser only with your consent. You also have the option to opt-out of these cookies. But opting out of some of these cookies may affect your browsing experience.
Necessary Always Enabled
Necessary cookies are absolutely essential for the website to function properly. These cookies ensure basic functionalities and security features of the website, anonymously.
Functional
Functional cookies help to perform certain functionalities like sharing the content of the website on social media platforms, collect feedbacks, and other third-party features.
Performance
Performance cookies are used to understand and analyze the key performance indexes of the website which helps in delivering a better user experience for the visitors.
Analytics
Analytical cookies are used to understand how visitors interact with the website. These cookies help provide information on metrics the number of visitors, bounce rate, traffic source, etc.
Advertisement
Advertisement cookies are used to provide visitors with relevant ads and marketing campaigns. These cookies track visitors across websites and collect information to provide customized ads.
Others
Other uncategorized cookies are those that are being analyzed and have not been classified into a category as yet.
SAVE & ACCEPT