Traditionally, cattle are weighed by confining them to a livestock chute equipped with scales. Although there are differences in scale quality, the majority of chute weights tend to be fairly accurate, especially given regular calibrations. However, even scales of the highest quality, with regular calibrations, can still present chute weights that don’t show the animal’s true weight. This is simply due to the difficulty in capturing an animal’s empty body weight.

Rumen fill in adult cattle can account for between 12 and 22% of live weight, meaning that the time of day can have a significant impact on chute weights and can cause consecutive chute weights to differ by up to 40 kg/88 lb. Such differences in chute weights are also affected by animal stress, taring of the scales, and by the amount of time between the first and last weights collected.

Researchers have tried to improve the relative accuracy of chute weights by weighing cattle after holding off feed for a 12- to 24-hour period, or by averaging weights collected from two consecutive weighing days. Although this improves the accuracy of the chute weights, such frequency of weighing is impractical in many commercial settings.

In a typical feedlot, cattle are usually only weighed as a group on arrival, and thereafter individually only when being treated. Due to the difficulty of capturing regular individual weights of all animals, pen average information is often used to make cattle management decisions, such as administering medications, determining growth rates and estimating the timing of shipment for harvest.

Taking frequent chute weights is stressful for the animals and for workers, is labor intensive and results in a loss of performance. Previous studies have shown that it takes 1-5 days for an animal to recover performance and normal feed intake following a chute-weighing event.

In-Pen Weighing Positions are highly advantageous in feeding and finishing lots because they continuously monitor animal body weights in an automatic, stress-free manner.

HOW THE IN-PEN WEIGHING POSITIONS WORK

The In-Pen Weighing Positions (Figure 1) consist of a weighing platform positioned in front of the water trough, designed to collect partial body weights (PBWs) from animals tagged with half duplex (HDX) radio frequency identification (RFID) ear tags. Each time an animal visits the water trough, its unique RFID number is recorded, along with a PBW, and other data acquired from the sensors.

The load mechanism and RFID equipped frame are connected to a data acquisition panel which samples the RFID antenna every 125 milliseconds (ms), and the load cells every 0.97 ms, at a resolution of 30 grams.

Aggregated data is transmitted wirelessly up to 9 km/5.5 miles line of
site to a standard data acquisition computer, where the data is continuously recorded to the hard drive. At the end of each day the data is validated and processed into usable information. All In-Pen Weighing Position data are audited and the PBWs are converted to full body weights using proprietary algorithms.

The second-by-second weights are adjusted by a tare weight which accounts for the weight of any debris on the scale. Additionally, an extensive network of algorithms adjusts the predicted live weights to reflect In-Pen Weighing Position data collected on previous days and weight trends predicted into the future. Animals that don’t appear to follow their expected growth pattern, based on previous and future predicted data, can be flagged by the software for automated marking and further action by the operator.

Vytelle and others have indeed collected individual animal weights in front of a feeding or watering location using full body scale platforms. Typically, with full body scales, stanchions are required to prevent multiple animals from standing on the platform at one time, something which impacts normal behavior and adaptation to the feeding or drinking position – and some animals never adapt to the fenced area.

Furthermore, full body platforms require continuous maintenance and cleaning to prevent mud and manure build up, as well as freezing and binding of the load cells under the platform. All of the above challenges are overcome by using the In-Pen Weighing Positions, which are designed to measure PBWs. Additionally, accuracy of full body weights can unknowingly be compromised when a full body weight scale fails. In-Pen Weighing Positions are always positioned in groups of two, allowing for weight data to be audited.

The first question often asked about In-Pen Weighing Positions is, “How accurately do they weigh?” A question like this requires a rather detailed explanation. Both accuracy and precision are factors that need to be considered (Figure 2).

In-Pen Weighing Positions also greatly enhance the precision with which weights are collected, as the data can be processed over a variable time using different data handling techniques. Vytelle’s proprietary algorithms reduce the effects of rumen fill on PBW and live weight calculations, essentially providing a true empty body weight.

Direct comparisons of chute weights to In-Pen Weighing Position PBWs and converted live weights can present discrepancies. Although there are differences, it is important to note that the sheer volume of In-Pen Weighing Position data collected adds enormous accuracy to the live weight predictions, a level of accuracy equivalent to collecting at least five chute weights for each animal on each day, something which is simply not practical in a commercial setting.

Additionally, Vytelle’s proprietary algorithms and extensive auditing measures ensure that all PBWs included in the conversion to live weights are sensible and precise. 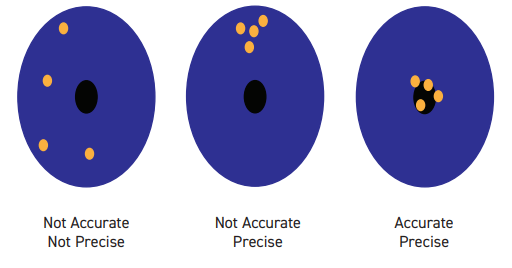 In-Pen Weighing Positions have the ability to capture daily weight data in a highly accurate and precise manner. Their capabilities allow producers to make calculated decisions that work to improve the overall efficiency of their operation.

Although live weights calculated using our PBWs can differ from chute weights, it is important to remember that In-Pen Weighing Positions are highly accurate due to the substantial number of weights collected and the extensive network of algorithms used to ensure that measurements are precise.

Chute weights are often associated with a large degree of error, simply due to large differences in an animal’s rumen fill, something which can alter a single chute weight by up to 40 kg/88 lb. Our technology is highly beneficial because it automatically measures individual animal body weights several times a day in a stress-free, natural way that reduces labor costs, increases profitability, ensures the safety of the animals and their handlers, and gives you the precise information you need to ensure your herd is always progressing. 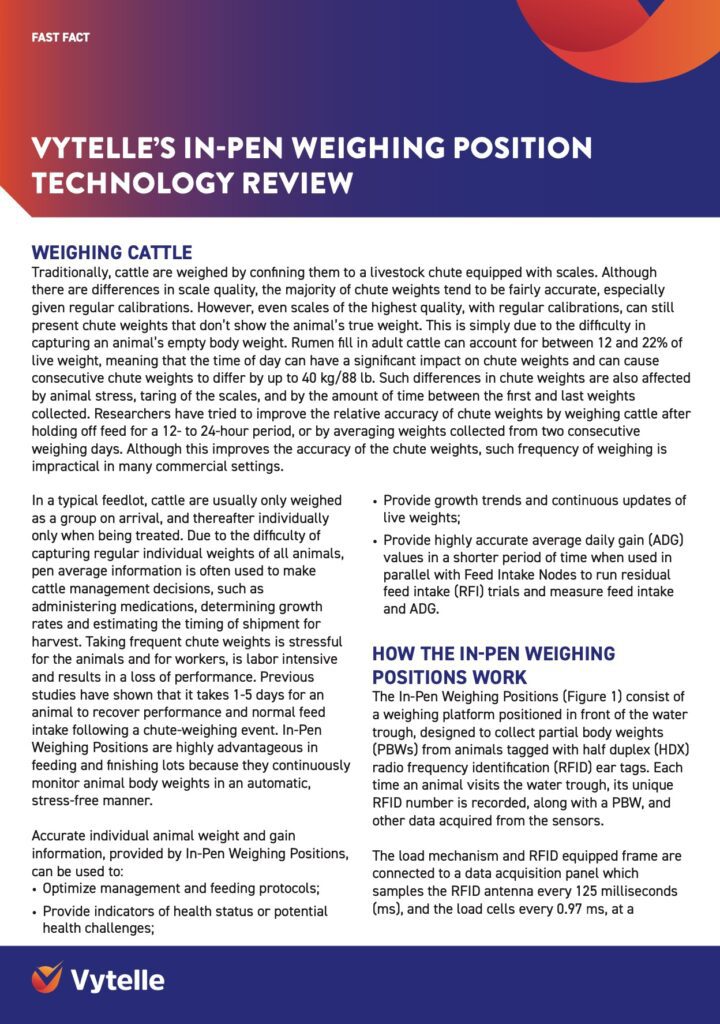 Call Us For More Assistance